That piece is rather indulgent and will draw criticism for some rather thin papering over clear contradictions and inconsistencies. technologyreview.com/2022/02/09/104…

But this is important:

“Shi now realizes the controversial nature of her work and agrees that there’s an urgent need to step up regulation and oversight of risky research.” 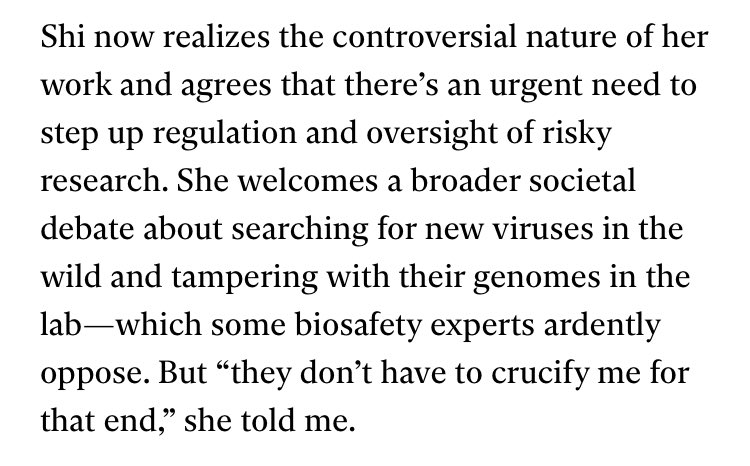 But the question is how much China is ready to abide by such nice ideas, when it is engaged in full-on…

competition with the US.

As Callahan has said before, China does not mind taking these risks.

It can just handle the consequences, force obedience internally and manage the narrative externally..
@janeqiuchina

Franz, adviser to EHA, strong proponent of the Track II cooperation with China which effectively resulted in a US technology transfer in pathogenic DURC research, put it also very clearly:

Such aspirational words by Shi are also certainly not reinforced by the fact that she has been sitting on the WIV DBs for more than 2 years now.

So the cynic in me may look at this as trying to close the barn doors after the technology transfer has happened.

Anyway, this is a perfect complement to Cohen's piece in Science on Daszak: "Prophet in Purgatory".

What is the next one? Koopmans? Gigi?

What about Zhang Zhan instead?
Or Li Zehua, Chen Qiushi, Fang Bin and many more.
They are the real victims.