Questions for those on that famous 1st Feb 20 call, who then suddenly changed their mind about the possibility of SARS-CoV-2 being a lab construct:

1/ Did you know that SARS-CoV-2 cleavage site ( RRAR|SVAS) is only found in hENaC, which was characterised precisely at UNC?

2/ Did you know of the DEFUSE work-plan?

T01-Task 3: Create a chimera
For this use a promising low prevalence pathogenic spike and a more prevalent lower-risk backbone.

RaTG13 would be at the exact top of the list as it was known to have very likely killed 3 people in 2012. 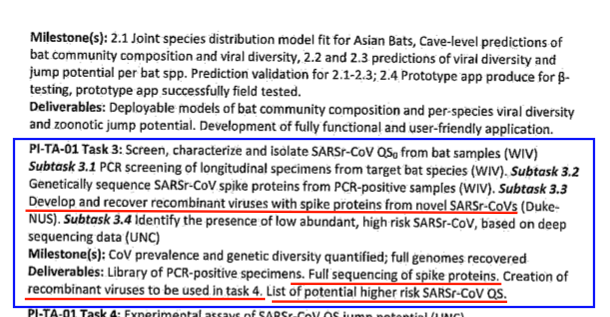 3/ Did Peter Daszak tell you at the time about the Mojiang story and RaTG13, which would have clued you to the fact that RaTG13 would have been the perfect candidate spike for this work?

Or did he like Shi at the time just forget to give any detail about the mine and the deaths? 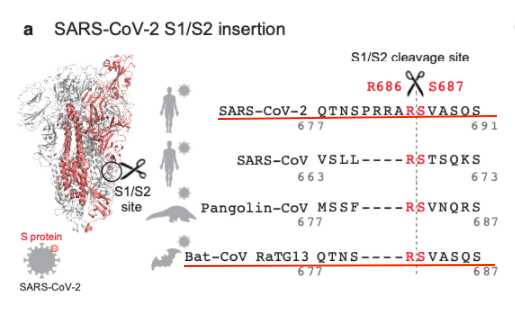 4/ What did you make of the double CGG arginine codon, especially if you already knew of the *unique* match to the ENaC, characterised at UNC?

How did you handle the fact that CGG-CGG is by far one of the least common ways to code RR in a virus, but the most common way in a lab?

5/ Did Peter tell you that RaTG13 was sequenced in 2017/18 in perfect synchronicity with the Deliverables under TA-01 Task 3 which was being written at the time?

6/ Or did he - like Shi Zhengli - pretend that RaTG13 was only sequenced in 2020 and that the tests of the miners samples were negative?

Both Shi's assertions were proven false, and both happen to be key deliverables under PI-01 Task 3.

7/ Did Peter give you access the the WIV sequences DB, so that you could try to match one to a backbone that could be used to create a chimera with the RaTG13 spike, as per DEFUSE work-plan?

Or did he also tell you that this would draw unwelcome attention?

8/ If Peter was fully transparent about all the points above, how on earth could you confidently exclude the possibility that SARS-CoV-2 was not tweaked in a lab?

And if he didn't, don't you think that you have just been telling porkies since then? 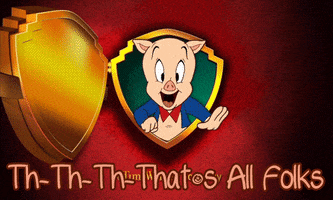 PS: Funny enough, even Chinese scientists from Shanghai looking at the natural evolution of FCS in coronaviruses could NOT exclude a lab construct in late 2020 - and they likely did not have all the information that Peter should have given you: