"Seasoned skeptics wondered how someone with no formal training in virology, and no actual laboratory (EcoHealth has offices, but no labs at its New York City HQ) was swinging such a large bag of research funding." 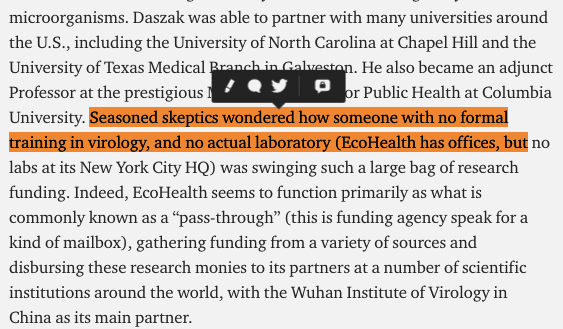 "There is also a strange and slightly sinister climate of intimidation that hangs around Daszak.
..
Daszak has repeatedly engaged in a PR campaign marked by disinformation, intimidation and distraction.

"These are not usually thought of as the tools of a scientist, but they are certainly central to the craft of a rather different trade..."one that is coincidentally represented on the Advisory Board of EHA"

Scientists are fond of dark humour, and while one colleague mused that EcoHealth has predicted and prevented “zero pandemics” in its history, another added “or perhaps minus one?”

“we did nothing wrong” he asserted to Science, adding, “we went above and beyond what normal scientists would do”. Daszak complains to Cohen that there is an “anti-science attack” and that EHA is the target.

[..] a pattern of deceit, denial and obfuscation served to obscure the revelation that the Imperial Leader may not after all have been wearing a magnificent suit, [..] and that the technological advance they promised was in reality much less substantive than had been advertised.

With a proper send off at the end:

"The author [..] does not know the proximal origin of the virus, but in his opinion frozen lobsters from Maine were unlikely to be involved. "