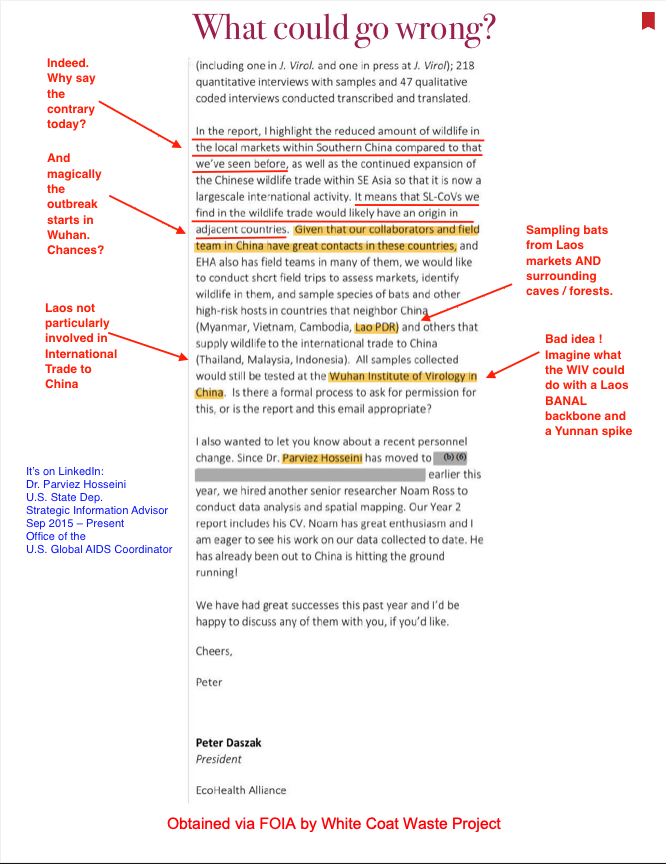 The bat sampling is for markets AND surrounding caves & forest:

So it definitively includes wild-caught bats too: 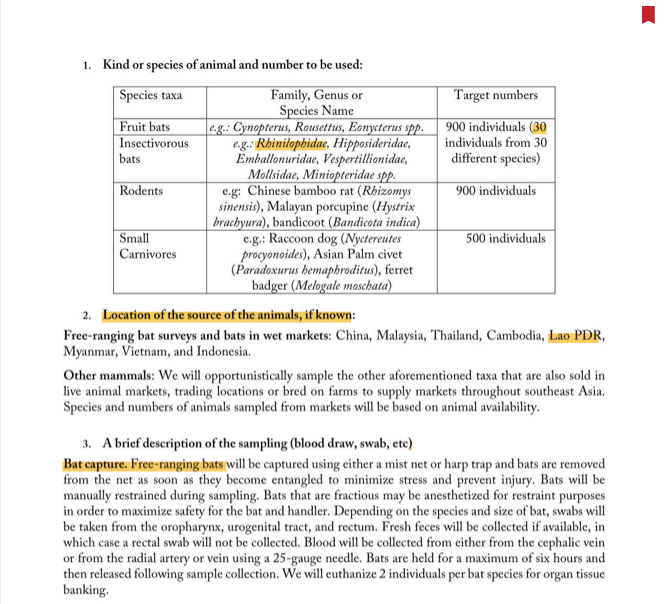 Additionally this sampling was to involve Chinese samplers, the usual collaborators of EHA, and all the samples were to be processed at the WIV.

Now we have a very plausible direct route from Laos to Wuhan, a route with two options:

#1 Wuhan bat sampler infected on field sampling trip.
Interestingly this is an hypothesis that Callahan himself has on the top of his list.

#2 Research accident in Wuhan when manipulating a Laos BANAL-like BatCoV (possibly used as a backbone where a Yunnan-type spike was introduced).

Basically the exact recipe given in DEFUSE:

.. a recipe which according to the sudden urge to sequence that boring RaTG13 in 2018, seems to have been much more than just theoretical:

Anyway - what a mess!

Now if you still think that it is more plausible that a wildlife infection or market animal with a BANAL like BatCoV made its way of all places to Wuhan (and nowhere else), without the help of such a research project, then good luck to you.

There is also something that baffles me here.

How come that the USAID / State Dep agreed to have these samples from Laos and other countries all sent to the WIV?

Come on! This is DURC and you use the WIV to process them all.
Is anybody watching?

And it fully breaks Callahan's basic rule for this kind of Cooperative Threat Reduction game:

>> One should always try to involve local labs and not just ship to a foreign lab (and certainly not China!) <<

This should force a serious downgrade of the market zoonotic origin.

=> The most direct - and correctly **exclusive** - link between a BANAL type specimen from a market or cave in Laos and Wuhan now goes via the WIV and EHA.

And it also allows for the presence of a BANAL type sample in Wuhan just at the right time, if one considers a lab accident, potentially as backbone for a chimera with a nasty spike.

EHA is not reducing the DURC risk but actually increasing it, by using Chinese and local teams to send market and wild caught bats samples directly to the WIV.

A grave mistake in the CTR game. That this could be allowed shows a total dereliction of duty from the supervisors.

That email on page 60 basically says 'as we did with year-4, we would like again to collect samples in South East Asia (markets, caves, etc) and send them to the WIV for year 5 (to May 19)'. 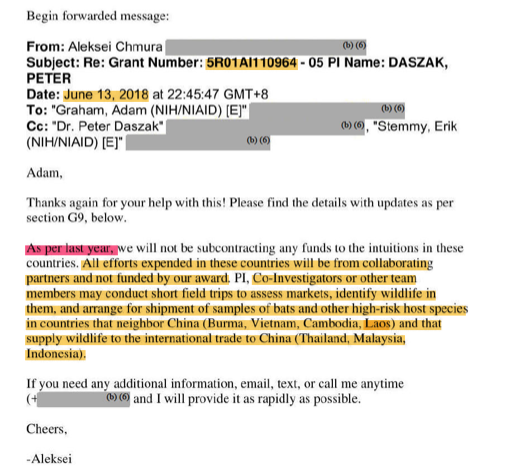 It cannot have started before year 3, since EHA first asked to be able to send samples from Laos and other neighbours to China in that email below dated May 2016, at the time of the end of year-2 reporting (p.75-76). 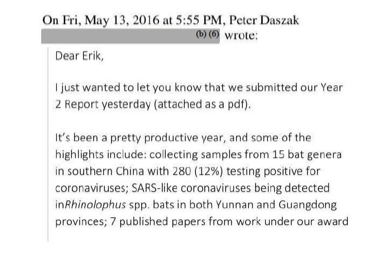 The question is: Did they also ship South East Asian samples to the WIV in year 3 (June 16- May 17)? 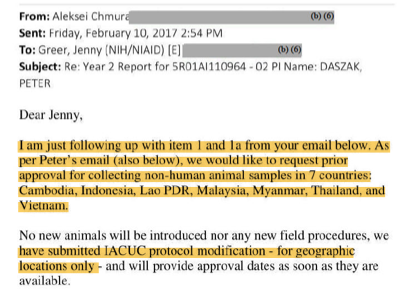 Also based on the answer for Burma (a more complex process due to USG sanctions), we can see that they would have likely targeted at least 4 samplings over the 2 years in Laos (p. 89).

Now if you want to understand why EHA decided to sample neighbouring countries in the middle of the grant, it all goes to the their observation of a reduction in the purchase of wildlife at wet markets in South-China and a shift to trade with other countries. 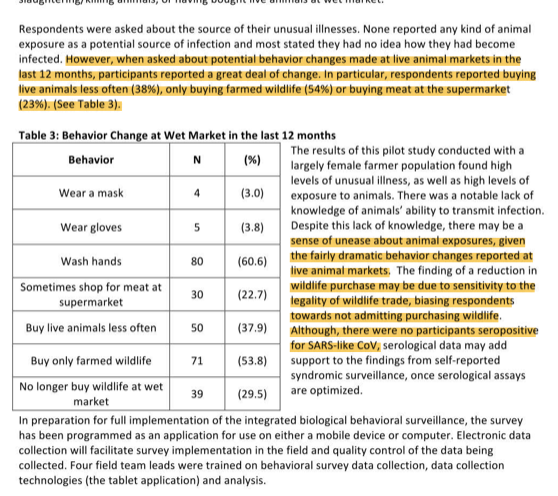 Page 178 is interesting because is give the basic approach 'sample / check spike / create mutant' for both SARS and MERS:

I have not seen any paper under that R01 grant about the BatCoV samples from Laos and other neighboring countries sent to Wuhan.

- Why no paper?
- Can we see the sequences of the Laos BatCoVs sent to Wuhan?

In Sep 19, EHA published their findings about high-risk people in Southern China (including low seropositivity of 0.6%) covering work for years 2 to 4 (to Jul 17).

Nothing since about these BatCoVs, especially the ones from Laos. ncbi.nlm.nih.gov/labs/pmc/artic…