The Mysterious Case of the COVID-19 Lab-Leak Theory newyorker.com/science/elemen… via @NewYorker

Reviewers within DARPA “were really shocked” by the “irresponsible” nature of the proposal, and its lack of consideration for the risks that gain-of-function research would entail, an official, who was not authorized to speak to reporters, told me.

Andersen: “I was quite appalled, actually, to see it released now. I think the U.S.-based researchers that were on this particular grant have done a huge disservice by not releasing this information earlier.”

We can all thank @PeterDaszak for that.

French virologist: "The secret is if you just look closely enough, you can see a tiny Wuhan Institute of Virology signature."

What this chapter of her work demonstrates, however, is a high tolerance for risk. “They were essentially playing Russian roulette with the virus that the world’s expert had labelled poised for human emergence,” David Relman, a microbiologist at Stanford, said.

Human hubris is high on my list, but sometimes it is just pure stupidity:

"They exhibit an admirable drive to follow the money, to upend centralized power, to overturn academic hierarchy, and to expose the injustices of oppressive governments. "

Good references to some of DRASTIC work:
@MonaRahalkar @TheSeeker268 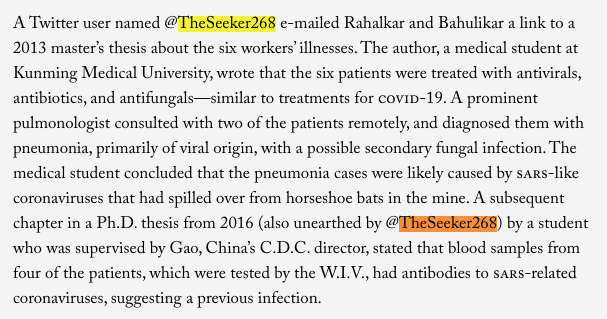 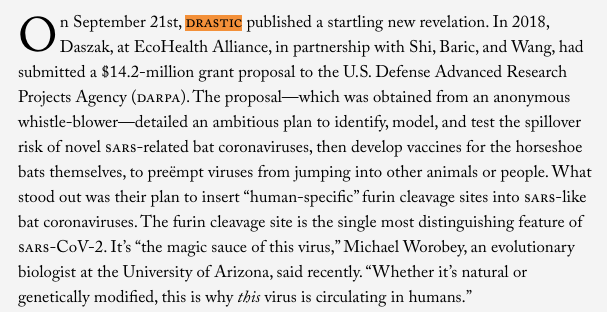