“I consider this very unrealistic, a classic conspiracy theory.”

“China has had a very high level of high security laboratories for over ten years. They have frequent inspections and very strict safety standards.”

“During the Sars epidemic in 2004, employees were infected outside a laboratory. As a result, the biosecurity of laboratories in China has been greatly improved.”

Well, at least we know where Kathrin stands.
Great addition to the SAGO team, no doubt.

Again, Kathrin Summermatter parotting Peter Daszak in 1815.ch/news/wallis/ak…
"With every new virus, the first hypothesis is that it could have come from a laboratory. However, these speculations are insignficant, they are typical conspiracy theories."

And again:
"There are also supposed experts who want to establish themselves and jump on the corona train by spreading theories that have not been tested."
"Scientific data shows that the starting point of the corona epidemic is an animal market in Wuhan"
www-1815-ch.translate.goog/news/wallis/ak…

Now Kathrin is the only biosafety expert on SAGO - and she has made her mind about the origins - no doubt whatsoever, while ignoring all the data that show that a research-related accident is fully plausible.

SAGO is not just about Covid-19 but about future pandemics.

Sadly, it even gets worse - weirdly worse:

"But if such documents are not available, that does not mean that work is being done worse"

(Question: Any COI on being paid for these inspection jobs in China?)

Then it gets plainly ridiculous.
Has she ever studied the SARS lab-acquired-infections and the Beijing-Anhui lab-outbreak of 2003-04?

Of all the biosafety experts, SAGO had to pick up that one. 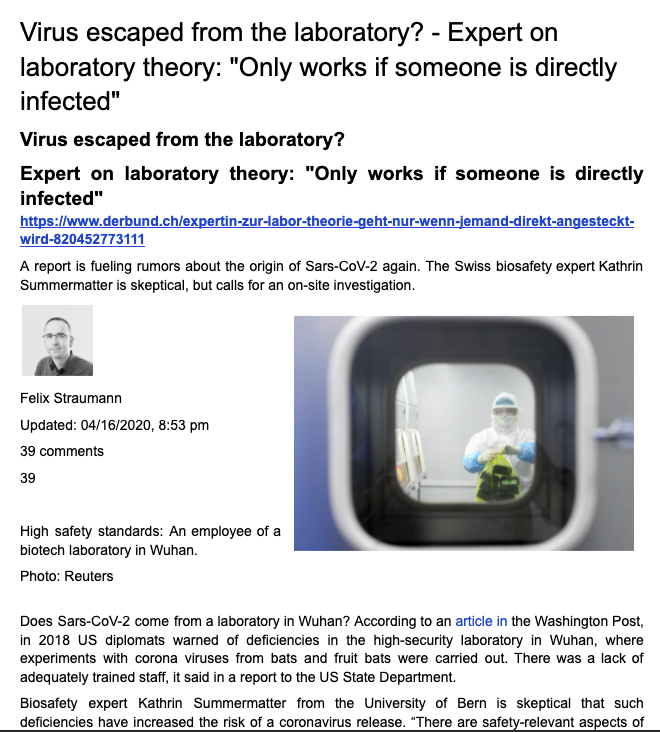 Same logic in Die Neue Zeitung:
If there is a risk of being infected, you definitely stay at home and isolate yourself first - and the staff, who are usually well trained, know that. She considers it extremely unlikely that a pandemic of this magnitude originated in a laboratory.

with a quick translation:
bit.ly/3p7Rthz