This paper can be found below.
It actually says preciously little that is new - only puts a new twists on well known facts while ignoring the logical issues that the suggestions in the paper raise.

The poor pangolins are again rolled out for the purpose.
chinaxiv.org/abs/202107.000… 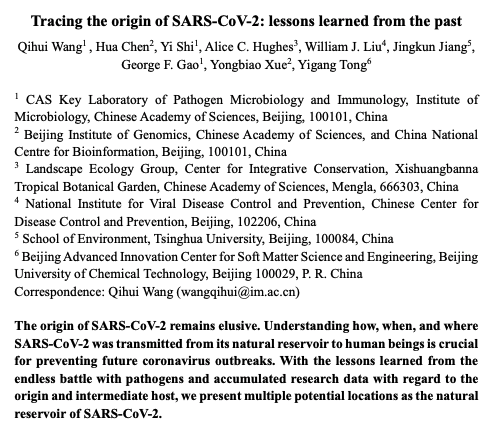 Let's start by what is clear and well accepted: the market was just an amplificator event, on line #2 of Wuhan tube.

An haplotype network shows that the samples isolated at the Huanan Seafood Market do not cluster the ancestral lineages - no jump to human there.
#DRASTIC

Back on the 19th Feb 2020, Corlett and Wen-Bin Yu - also from the Xishuangbanna garden - concluded exactly the same thing based also on a haplotype analysis:

That isb rather disingenuous since we know from the SCMP and Health Times leaks that there were confirmed cases in Nov 2019 - with the first one around the 17th Nov.

But it fits nicely into the 'anywhere but China' angle that the paper then develops.

Also the Corlett, Wen-Bin Yu et al paper from Feb 20 gave a tMRCA from mid to late November, but they crucially noted that not enough early sequences were being published - no such criticism in Gao, Hughes et al:

Anyway Gao, Hughes et al eventually roll out the poor pangolins and go on explaining that the virus could have come from about anywhere, Africa, Europe, etc: 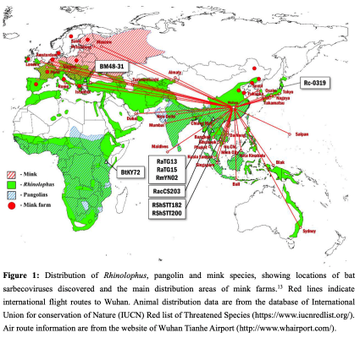 The 'piece-de-resistance' is the resurrection of the frozen-food import hypothesis (a.k.a. fish fingers) in a nice example of twisted logic:

The first issue with that one is that as per Table 6 of Annex E4 of the China-WHO report, only one frozen-food vendor our of 24 who contacted Covid-19, was selling IMPORTED frozen food.

The 23 other ones (and 21 out of 22 stalls) were selling DOMESTIC frozen food.

So if one wants to go down the frozen food path, there are 23 more reasons to believe that it is not a foreign import and that it still points to China.

Also the frozen food transmission is still debated. In the end, a likely explanation is that the vendors got it from customers

The second twisted piece of logic is to mention that Wuhan received extensive international flights from cities around the world before the SARS- CoV-2 pandemic, to explain the outbreak in Wuhan.

While it is possible, probabilities matter and need to be considered here.

Wuhan is only one city in the world that imports frozen food via international flights. And it is the one where the outbreak started (all sequences point to Wuhan).

Hence the most likely explanation is that the human jump happened in Wuhan or is specifically linked to Wuhan...

especially when you consider the Wuhan specific risk factor which is the coronavirus research activity there.