It's worth remembering what Ma Guoqiang, the municipal Communist Party secretary for Wuhan told on CCTV back in Jan 20:

In particular Ma said the restrictions should have been brought in at least 10 days earlier and expressed regret/guilt for the delays.
medicalxpress.com/news/2020-01-chinese-response-virus-epidemic-worse.html

Today, after the party totally changed the narrative, it all sound very odd. But yes, that is what the party itself was saying at the time: 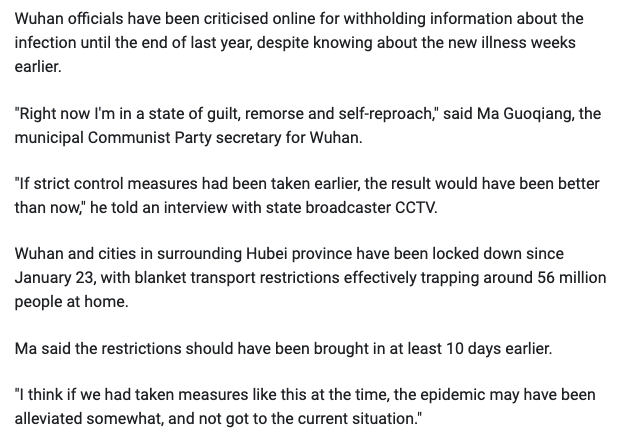 He also confirmed at the time that 5 million residents had left Wuhan before it went into lockdown. This includes people who travelled for the lunar new year festival, as well as those who fled to escape the virus and impending shutdown.

And Zhou Xianwang, the mayor of Wuhan, confirmed that in his own interview with CCTV:

Here is the mayor's interview back in late Jan 20:

When it comes to understanding what really happened before the first Thai case was reported (which forced China into action), we will have to wipe out the official narrative that China has imposed since then.

Such as that 'reality check' from the Ministry of Foreign Affairs:


'China took the most stringent measures within the shortest possible time, which has largely kept the virus within Wuhan. Statistics show that very few cases were exported from China'