About the Global Virome Project:

"..the GVP challenges the global community to use this knowledge to proactively develop preventive and preparedness measures, *** such as vaccines and novel therapies, before spillover into human populations occurs *** "

Which is best achieved by taking some existing BatCoV backbones, mixing features that can contribute to the capacity to infect such as a furin cleavage site in the S spike protein that gives strong affinity to human ACE2

then stabilizing the resulting virus and using that as one target of a broad pan-BatCoV virus vaccine.

A vaccine that would be one step ahead of the worse BatCoV evolutionary front.

It's a great idea, and can save 1,000s of lives. It also has the potential to badly screw up.

What would be the tell-tell signs of such a screw-up?

- Perfect adaptation to humans, with poor adaptation to other mammals ACE2.
- A furin cleavage site which never existed before in any other betacoronavirus subtype B
- Absence of credible animal host (with many red herrings)

- Confusing stories as to related BatCoVs and their sampling
- Non-release of the sequences of 8 related BatCoVs
- Non-access to virus databases that were part of the Chinese National Global Virome Initiative
- Non-disclosure of the cases of 200+ confirmed cases for 2019.
- etc

Without forgetting a first outbreak in a city where many labs were doing exactly that kind of manipulation, with no detected credible earlier infection anywhere else.

Or you can decide that all the above is just fine and perfectly normal, just a coincidence at worst - as so many

Hint: If you career depends on generous funding for such research, it's obviously a coincidence. Ad hominems such as 'conspiracy theorist' are then very helpful.

They are very cheap too and have the advantage of not necessitating any further arguing - so very safe.

Anyway the good thing is that some important scientists agree that the Global Virome Project is essentially a waste of taxpayers money and should not focus on prediction or playing God.

For once I agree with Andersen. 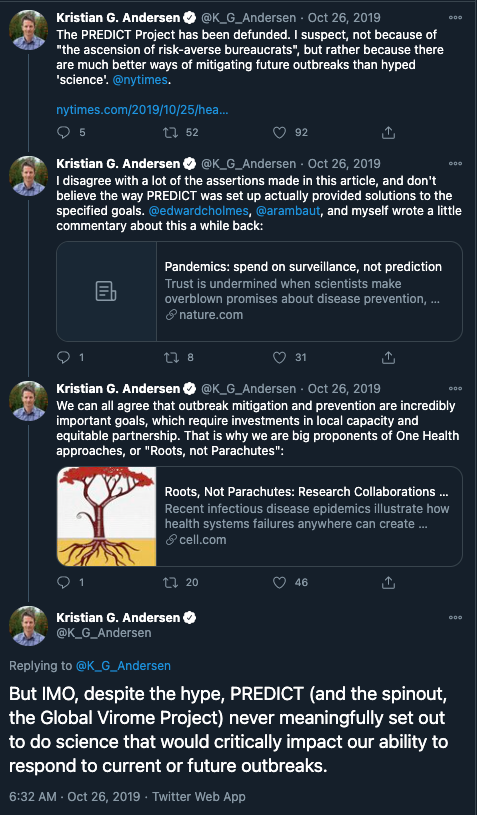