Please note that Liang Wannian effectively confirmed the Epoch Times leak at 35'04 in the WHO conference:

This is a leak that DRASTIC always considered as credible after careful review, however partisan the Epoch Times may be.


I wrote about it there and it may be worth reading it again.

Note that that data collection had a bunch of October and November cases, which now seems to have vanished into thin air.

But more importantly, there are at least 3 levels of information feeding into each other:

First that rushed data collection likely feeds into official national database of cases managed by Pr. Yu Chuanhua and his team. (Pr. Yu Chuanhua has strong links to the PLA). 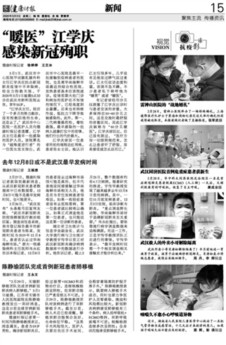 Then the database of Pr. Yu Chuanhua likely feeds into the data used to calibrate the models of the ‘War epidemic resumption big data platform’ managed by the National University of Defense Science and Technology (NUDT).

Not only that 2019 data but most likely truer numbers about the early spread in Jan 2020. Numbers that are required to properly calibrate their network models.

In conclusion the data exists and seems to be mostly in hands that are either directly PLA or closely related to it.